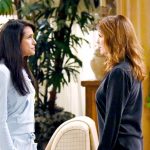 Soap Opera Digest: Since Sheila’s been back, she and Quinn have enjoyed a rivalry of epic proportions. What was your first reaction to this story?
Kimberlin Brown: I’ve got to tell you, when Brad [Bell, executive producer/head writer] wanted to bring me back, I had no idea that I would even be working with Rena, so it has been awesome getting to know her because she is so well-prepared and makes going to work a pleasure. We’re doing everything people at home wish they could do and get away with.

Rena Sofer: I am incredibly protective of my relationship with John [McCook, Eric] and when they told me that they were bringing Kimberlin on, I was initially like, “What do you mean? Doesn’t her character do all of these horrible things? Why is she here? Why is he even letting her in the room? I don’t understand.” I got super-defensive, and then I started working with and hanging out with Kimberlin, and I liked her so much that I was like, “Okay, I’m good.”

Digest: You both play such formidable women. Do people get out of your way when they see you walking down the halls of CBS?
(They both laugh.)
Sofer: No!

Brown: No. If I were anything like my character, I’d be in big trouble.

Sofer: Kimberlin, you weren’t watching the show when you were off, right?

Digest: You did. You were ANOTHER WORLD’s Joyce and Kimberlin was CAPITOL’s Danny.
Sofer: Wow!

Digest: Had you ever crossed paths before now?
Brown: We really hadn’t. I don’t think I even saw Rena at the Emmy Awards. You were in New York and on another network, right?

Sofer: You’re welcome. We were like the working-class actors, while the L.A. actors were always pretty famous and they were beautiful. But no, we never crossed paths.

Brown: Most of the time, when you went to the Emmy Awards from the West Coast, the producers had functions for you to be at all week and you were doing them with people from your show and your network.

Brown: Obviously, I knew of her and those incredibly piercing blue eyes and how gorgeous she is but no, never met her.

Digest: What were your first impressions of one another?
Brown: It was probably harder for Rena than for me because everything had to be so secretive when I came back. They wanted me to stay in my dressing room and Rena was probably wondering, “Who the heck does she think she is? She’s not even coming to rehearsal?”

Sofer: There have been people who never got their hair and makeup done in the makeup room, and never showed up to set, and in the beginning, it was so secretive that we all had to call her Jane. I didn’t know the character of Sheila, so I ended up always calling her Jane as we were shooting and people would be like, “No, it’s Sheila,” and I was like, “Then stop writing Jane and call her Sheila!” But Kimberlin knows now that I like to go in, I love to do my work and then I like to leave. I don’t want to sit around and wait for actresses to decide to show up on set, so it was hard at first. Then, I found out it had nothing to do with her. She’s incredibly professional, is present all the time, knows her lines and does the same thing as me: She wants to come in, do great work and then get the hell out.

Digest: What’s it like filming those elaborate catfights?
Sofer: Based on that comment of, “I just want to do my job and leave,” I was like, “Oh, my God. We’re going to spend an hour having [the stunt doubles] do our jobs and we can do this. Let’s just do it!” And Kimberlin was like, “Rena, let these women earn their money and do their jobs.”

Sofer: I can’t believe how quickly Kimberlin and I took up that fight choreography and made it work. We saw them do it, ran through it a couple of times and were like, “Okay, we’re ready to go.” They’re not the most fun things in the world to do. Kimberlin got hurt a couple of times. She had glass in her foot. She had to be on her knees a lot and that was hard for her. I was being choked so many times it was crazy. Those ladies did such great job doing it and teaching us how to do it.

Brown: They really prepared us but yeah, we’d go home and feel a little beaten up the next morning.

Digest: Was the feather pillow catfight done in one take?
Sofer: We did it only once.

Brown: Only once, and I could barely contain myself.

Sofer: You were so funny.

Brown: I wanted to laugh so hard! When Rena hit me with her pillow, it didn’t explode, and both pillows were supposed to explode. Neither one of us knew what to expect and when I hit her the first time, the thing exploded everywhere! She was able to keep a straight face, and I actually had to bend my head down a bit so you couldn’t see my face for a couple of seconds because I needed to regain my composure.

Digest: Considering their behavior, are these women more alike than they care to admit?
Sofer: Well, they both protect what they feel is theirs. They’re equal in that sense.

Brown: The way I have always justified the things that Sheila does is because she just wants so desperately to be loved. Sheila believes that Eric’s the one person who truly loved her, and that’s a feeling she wants to recapture. Whether or not it’s going to happen depends on his current wife so —

Brown: She just wants to be loved!

Digest: You each have a portrait on the show. What is it like seeing yourself hanging above the Forrester fireplace?
Sofer: “Why are my hands on my thighs?” That’s really the only thing I ever think when I look at that picture.

Brown: I was wondering, “Why didn’t I get a professional photo shoot for my portrait the way that she did? Why did they set me on a box on the corner of the stage and try to get me to copy the head position when she was shot from above and I was shot from below? How can I match that when you’re not even shooting me from the same angle?”

Brown: The other thing with my portrait I’m wondering is, “Is there nobody who can retouch this stuff?”

Sofer: Have you seen my hands?

Brown: Is there no one who can shave a few years off, please? It is a painting, after all.

Digest: Could these women ever be friends?
Brown: It’s funny that you mention that because when Rena and I were doing the pillow fight, I said, “Wouldn’t it be hysterical if one of these times, we were having a fight and we both just looked at each other and started laughing and said, ‘Let’s have a glass of wine.’ ” No one wants to be Quinn’s friend. No one wants to be Sheila’s friend. Wouldn’t that be something if the two of them, at the end of the day, found some sort of comfort with each other?

Sofer: I think it would be amazing, when all is said and done, they’re in a bar together and you understand they’re a lot more alike than anybody thought.