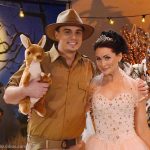 “The thing I love about Quinn is, over the years, we’ve been able to reach the hearts of the audience where they actually feel sorry for her,” notes Rena Sofer. “As much as they might hate her or are scared of her or don’t like what she’s doing, there were moments that made them remember and realize she’s human, and that like all of us, all she wants is to belong.” Here, Sofer looks back on her alter ego’s highs and lows.

Memorable Moments: Quinn revealed to son Wyatt that his presumed-dead dad was actually billionaire Bill Spencer; she targeted Liam after Wyatt fell for his half brother’s love, Hope; partnered her business, Quinn Artisan Jewelers, with Forrester Creations, and kissed its CEO, Eric.

“I’ve never come on a show, other than when I joined JUST SHOOT ME for the last season [2002-03], where it was like, ‘Okay, here’s this woman. She’s got this going on but other than that, we don’t know who she is,’ and that’s kind of what Quinn was like,” recalls Sofer. “So, that’s exciting for an actor because you get this clean slate of a person you get to create but on the other hand, you’re like, ‘Whoa, which way do we go?’ But I’m grateful to Brad [Bell, executive producer/head writer] for giving me the freedom to do that. In the beginning, I was worried about Quinn becoming a gold digger. I don’t like playing gold diggers because gold diggers don’t have anywhere to go because when your motivation is money, once you have money, what’s your motivation anymore?”

Sofer had no trouble playing the mother lioness and interfering in her son’s love life. “Yeah, you could say she was an overbearing mother,” offers the actress. “That was where we really started with her, and then everything just grew by leaps and bounds. Quinn may have done some bad, irresponsible, mean things but in her mind, the end justified the means. She just wanted her son to be happy … no matter what.”

Memorable Moments: Quinn teamed up with Deacon to get their kids together; she upped her taunting of Liam by holding a sword to his neck; she may or may not have had something to do with the mysterious death of the Hope For The Future Diamond’s owner, Ricardo Montemayor; pushed Ivy into the Seine to sabotage Liam’s proposal to Hope; had kinky sexcapades with Bill; argued with Hope, who fell and miscarried; contemplated suicide but Deacon saved her.

“Deacon and Quinn were good partners in crime for a little while,” Sofer smiles. “And, taunting Liam was really fun. That was the predatory Quinn, but when it came to Hope and the baby, we saw that she could be vulnerable. All Quinn wanted was to be a part of a family. It wasn’t about being a Logan or Forrester, it was just about being a part of a family and when Hope lost the baby, which Quinn knew was not her fault, she still felt responsible.”

To demonstrate the depth of Quinn’s regret and sorrow, Sofer came up with a bit that wasn’t in the script: She sported one blue nail. “That was a visualization of her penance and that was my creation,” Sofer shares. “I came up with that and they put that in the show. It was something for Quinn to see and remember, all the times that she allowed her obsessions to damage her.”

Memorable Moments: Quinn and Deacon wed, despite the fact that he still had feelings for Brooke, and against her and Hope’s objections.

“The rivalry between Quinn and Brooke was short-lived but entertaining,” Sofer states. “We had that really good slap when Brooke was drunk.” Unfortunately, Quinn and Deacon spent much of their married life off-screen. “I think that [coupling] didn’t work out because they weren’t really connected to anyone. He really wasn’t bad. He was the one trying to keep Quinn tame, and she was looking at him and saying, ‘You’re drunk,’ but they didn’t allow themselves to be their worst selves. They tried to help each other not be their worst people, and being bad is more fun [laughs].

Memorable Moments: Split from Deacon, Quinn kidnapped an amnesiac Liam and held him hostage so Wyatt could woo Steffy; Quinn and Liam fell in love as “Adam” and “Eve”; Deacon discovered the plan and blackmailed Quinn, so she pushed him off a cliff but he survived; Liam regained his memory but didn’t press charges; Quinn dated Eric in secret and they wed, despite the family’s objections; Eric had a stroke; Ridge plotted against Quinn.

“These are my two favorite stories,” Sofer beams. “With Liam, Quinn learned how to love again. The writers gave her that moving backstory as a neglected child, which explained so much about her. All Quinn ever wanted was to be loved. The wonderful thing about this was when they had Liam, as Adam, take [the blue nail] off her, it was like, ‘You’ve paid enough. It’s time for you to let this go.’ I thought that was really beautiful and as a character, that was huge for her.

“Then came my other most favorite storyline, with John [McCook, Eric],” she continues. “It was amazing; being able to go to Monte Carlo and be with the cast was incredible. I feel like it was such a wonderful journey for Quinn, especially when it came to Eric because all of a sudden, Eric became part of her life and she had something else to live for besides her son, who she realized she really needed to leave alone. It was such a beautiful love story. I couldn’t have done it without John. John and I are really like Quinn and Eric. We deeply love, respect and defend each other as friends and co-workers. We really love these characters. When Quinn fought for Eric against his entire family, it echoed the way she fought for Wyatt when it came to Hope and Steffy. But now, it was based in a maturity that she had finally achieved and earned. When she stood at his side, she could have plotted to take the company but she’s not a gold digger. She felt like she was now in a place she really belonged.”

Memorable Moments: Ridge’s plot to break up Eric and Quinn backfired when they developed feelings for one another; Sheila exposed them; Eric planned to divorce Quinn and disown Ridge but eventually forgave them; Quinn and Sheila repeatedly came to blows.

“The love triangle that never happened,” says Sofer. “I don’t think that the physical necessarily had to happen, even though I would have loved to explore the relationship with Ridge more and deeper. There was a lot more we could have done, and we really never followed it through because it was so taboo. What made it such a great story is, here’s a woman who is madly in love, her husband is everything to her, but there is something dangerous about this other man that feeds a darker part of her soul which she can’t ignore or walk away from.”

As for Sheila, “The rivalry with Sheila was enjoyable,” Sofer adds. “I love that she came and caused this problem, and despite Sheila’s history of deceit and evil, Quinn was not a mouse to her lioness. Quinn could match her, and I think that was good. It was fun while it lasted.”