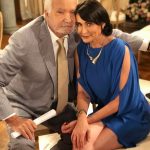 This is the longest I’ve ever been at any job,” reflects Rena Sofer, who will mark seven years on B&B this summer. “I was at GENERAL HOSPITAL for three years, LOVING for three years and other places for a year. I don’t think I was expecting to be here as long as I was, but every time my contract came up, it was the obvious choice to stay and move this journey forward.”

In light of her early days on the soap, Sofer marvels at her longevity. “The first couple of years were really just finding my feet in this character,” Sofer reflects. “She wasn’t well-defined, other than being Wyatt’s mom. She was just this blank page, and it was fun to decide what she stands up for and what she cares about and who she cares about and who she doesn’t. Other characters I’ve played, they had a lot more backstory or character development coming into it. I was always an actress who auditioned to fit into that role as opposed to this situation, where I was offered this role with the understanding of, ‘Let’s see what happens.’ ”

With the addition of Denise Richards as Shauna, the show is beginning to explore Quinn’s life before Los Angeles. Count Sofer in for the ride. “It was great to have scenes with Denise where we could sit down and create this camaraderie between us that I don’t get to have with anybody, other than my son, on the show,” Sofer says. “When Katrina [Bowden, Flo] first started before Denise came on, I was like, ‘I’m going to be touching you a lot and playing with your hair and physically assaulting you with love,’ and Katrina was like, ‘Um, okay. Sure.’ She doesn’t understand how Quinn takes mothering to a whole different level, and Quinn saw Flo as a daughter she never had so when Denise started, I was able to create this best friend who God knows what trouble they’d gotten into in Las Vegas as single moms raising their kids. It was fun to take the lines they gave us and create something.”

Sofer reports that she bonded with Richards quickly. “I love working with Denise,” she smiles. “If anyone knows me, they know I like working with pros, and what I mean by that is not so much experience as much as they take it seriously and they try to get everything they can out of it. They take pride in their work, and that is exactly how I would describe Denise. She and I have been in the same audition room with each other for the last 20 years. It was not as if we really knew each other or that we had been friends in the past. But being an actress of a certain age, and whatever that certain age is, even from 20 years ago, you tend to audition with the same people, especially the way it used to be when they’d pull every actress of that age and that look and that sense into a room and you’d sit there for an hour or two watching each one go in. Sometimes you’re sitting there for so long you start talking, and then you’d talk about different auditions and experiences. That’s how I knew Denise.”

Quinn and Shauna’s current beef with Brooke is a throwback to Sofer’s early days on the soap, which is a welcome return for fans — and the actress. “I think anybody who has watched Quinn for the last seven years knows you don’t mess with her,” she acknowledges. “I can’t tell you how much people constantly come at me on Instagram: ‘When are we going to see the old Quinn? I miss the old Quinn.’ So, it’s fun to have these moments come up. Brooke is out of her mind, and I mean that in the nicest sense,” she winks. “It takes a lot of gall for Brooke to stand in front of somebody like Quinn and say to Eric, ‘You need to divorce her. She’s bad for you.’ I enjoy the fact that instead of Quinn being mean or jealous, it’s Brooke who is out of line, and Quinn’s having to again defend her territory. This goes back to all the wonderful layers of who Quinn is because you can’t just say she’s evil or she’s a gold digger because there are reasons why she acts the way she does — especially if her family is at stake. Now, Brooke is going after her family and that is not something Quinn will tolerate.”

Off camera, Sofer’s life is thriving, as well. The actress reconnected with ex-husband Sanford Bookstaver, and the duo will head down the aisle again. “There’s no rush,” she stresses. “We already have a family. We already have a home. We have four dogs. We’ve been back together for about a year and a month. We sold our respective houses within a matter of months of being back together and moved into this new house, which will be a year in April, so it happened really fast. He asked me to marry him before we even moved into the new house. I said yes, of course.” As for the wedding plans, “The first time we got married, it was a big wedding, and now we’re just trying to figure out how we want to get married again,” she explains. “I want it to be magical. We don’t really know what we want to do. We ask each other about it all the time: ‘What date do we want it to be? Do we want it to be the same date as our first wedding? Do we want to make it a new date?’ It’s a lot to consider. It’s interesting when people get married; the first question everybody asks is, ‘When are you going to have a baby?’ I hope to God nobody asks me that question at 51 years old [laughs].”

The family recently traveled abroad for the holidays to Finland and Russia. “It was an incredible experience traveling with all three of my girls at the same time,” Sofer beams. “To see the Northern Lights and to be in a country like Russia with them was amazing.” Now, life continues forward. “Meghann has moved back to Iowa with her boyfriend; Rosabel is applying to grad schools and she’s in Iowa hanging out with her sister; and Avalon is killing it in ninth grade. What can I say? She’s an amazing student and an amazing young woman.”

Love Story: Sofer wed director Sanford Bookstaver in 2003. They divorced in 2016, then reunited after Sofer’s 50th birthday party in 2018 and got engaged again last year.

Three For The Road: Mom to daughters Avalon, 14, with Bookstaver; Rosabel, 23, with ex-husband Wally Kurth (Ned, GH; Justin, DAYS); and stepmother to Meghann, 34, from her marriage to Kurth.

Lois’s Lane: Of her Emmy-winning GH role, she exclaims, “One of my all-time favorites. She was a one-of-a-kind character who just came out of my body in a way not many have. I loved playing her.”

Aren’t You…? “Other than B&B, I get stopped for either GH or FRIENDS, which never stopped being popular. It’s iconic. There’s a charity in Tangier, Morocco, that I support, and the daughter of the woman who runs it loves FRIENDS. In Morocco!”

In The Know
Sofer reveals that she chose not to offer parenting advice to on-screen son Darin Brooks (Wyatt) and wife Kelly Kruger (ex-Mackenzie, Y&R) when they welcomed daughter Everleigh last year. “One thing I proudly wear as a badge of honorable dishonor is that I’m a huge know-it-all,” Sofer confesses. “I will let everybody know that I know everything, and so one of my New Year’s resolutions was, ‘Stop it! Just, please, Rena. Stop it.’ They’ll figure it out. I remember trying to give Scott Clifton [Liam] advice when he first had a kid and he was like, ‘No. No. We’re not doing it this way,’ and I remember going, ‘Oh, but you’re wrong,’ and he’s not wrong. This is the way he wants to do it, and that’s why everybody is as diverse as they are because their parents made different choices. Who am I to judge? At this point in my life, if anybody asks me my advice, I’m happy to give it but if they don’t ask me, I try very hard not to share it.”